Create an Account - Increase your productivity, customize your experience, and engage in information you care about.

The United Presbyterian Church began in 1825 as the First Presbyterian Church of Cortland, when a group of six became its original members. By 1827 it had grown to 134, and the next year its first meeting-house was built, on the same site as the present one. The architect for the new church was the same one who designed the 1890 House, and the impressive building has been placed on the National Register of Historic Monuments. One of its unique features is the scriptural texts lettered in gold on the wall. Photo provided by the East End Community Center. 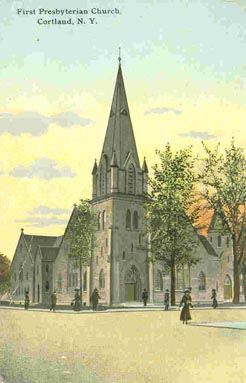